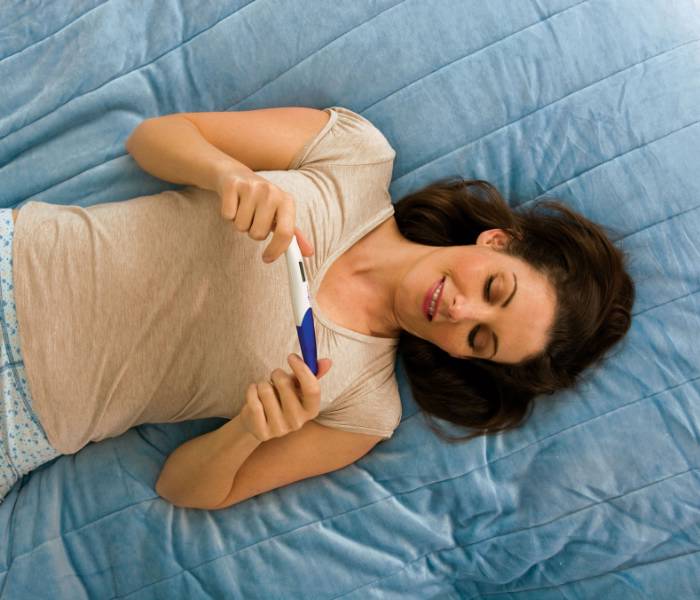 What is an ovulation test?

An ovulation test is a home test that measures the presence of the ovulation hormone called luteinizing hormone (LH). LH rises to a surge approx. 24-48 hours before ovulation occurs.

When you find your LH-surge, you can expect to ovulate within the next 24-36 hours, and you are now entering your most fertile days. If you have intercourse on the same day of your LH-surge, and/or the following day, you will maximize your chances of becoming pregnant.

Also 1-2 days prior to your LH-surge are days with high chances of becoming pregnant, and the same goes for about 12-24 hours after ovulation occurred. How come you might ask? Seamen inside a woman can survive for up to 3-5 days, and still be able to fertilize an egg.

However, the egg is only likely to live for 12-24 hours. This means, that even if you have intercourse some days before the actual ovulation, there is still a good chance you could get pregnant by it. And by knowing when to expect the ovulation some days in advance, you and your partner can better plan for intercourse.

Please make sure that you always read the instruction leaflet carefully before starting to test.

When are ovulation tests used?

In the user guide for the ovulation test you’ve bought, you will find a table that will help you find the recommended day to start testing in your cycle. Try to keep an even 24-hour interval between tests.

Usually any urine sample will do for testing, however one should avoid massive fluid intake in the hours before performing a test, as this could dilute the urine. Diluted urine could lead to misleading results.

Also, some manufacturers recommend that you don’t test until after 10 o’clock in the morning, or just not perform a test during the first 4 hours after you stood up. Therefor it is highly recommended that you carefully read the user guide for the ovulation test that you have bought, as directions for use etc. can vary between test brands.

On most non-digital ovulation tests you can read the result by comparing control and test line with each other. The control line is used to ensure that the test has worked as it should, and should always show.

When the test line (the red/purple line to the left in picture below)  is equal to, or stronger than the control line, it means that the ovulation test is positive and that the LH-surge has been detected. Be sure to read your result within the time limit for a valid test result. The valid time may be different for different brands.

If you have an intercourse one or more times within the next 48 hours after the positive result, you will increase your  chances of getting pregnant. If the test line is weaker in the color than the control line, or does not appear at all, the ovulation test is negative, and it is suggested to take a new ovulation test the following day at approx. the same time.

When do I start testing?

What day to start taking the first ovulation test depends on the length of your cycle. E.g. the number of days from your period starts, and counting the days forward up until the day before the next period begins. So this means, that every time you have a new period starting (clear red blood and needing full protection) this is Day 1 of a new cycle.

In the user guide for the ovulation test you’ve bought, you will find a table that will help you find the recommended day to start testing in your cycle, depending on your normal cycle length.

If the length of your cycles varies more than 3 days each month, use the shortest cycle length you have had over the last six months. You may also need more than 10 ovulation tests in the one and same cycle to be able to find your LH-surge, as one can not predict if your current cycle is a short one or a longer one.

Positive ovulation test – does it always lead to ovulation?

In most cases yes, however not always.  Ovulation tests register the increase of  the LH-hormone that surges approx. 24-48 hours before ovulation. The ovulation test does not respond to the ovulation itself, but instead to what happens inside the body before ovulation. It could be that a test shows a positive result because the LH-level is high enough for the test to show positive (e.g. the level has reached the cut-off level/sensitivity of the test), but it may not be high enough for the individual woman´s body to enable her to ovulate. It is the single woman´s body who decides when her individual LH-level is so high that it would trigger an ovulation.

What could affect the result?

The hormone LH (which surges a few days before ovulation) and the pregnancy hormone are very similar in their chemical structures. Therefore, an ovulation test could show a positive result due to hCG being detected instead of LH, e.g. not being able to recognize the two different hormones from each other.

My period hasn’t come – am I pregnant?

An absent period may be a sign that you are pregnant. To confirm whether or…

When a Pregnancy Test is Wrong: What Causes Phantom Lines and False Negative Results?