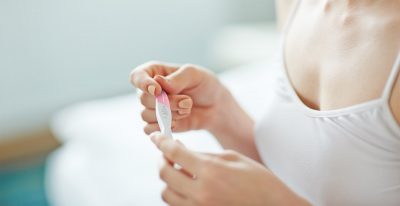 When planning a pregnancy, tests are one of the most essential parts of the process

People are facing many questions when planning a pregnancy. When should you use a pregnancy test? Where to buy it? And which tests are the safest, most reliable and cheapest on the market?

In this article, we will give you the answer.

All pregnancy tests respond to the presence of a pregnancy hormone called hCG (human Chorionic Gonadotrophin).

hCG usually occurs in non-pregnant women, and men in small amounts less than 5mIU/ml. However, most  pregnancy tests today have a sensitivity of 20-25 mIU/ml, which is significantly higher than the normal body level, making hCG an excellent marker for pregnancy and easily detectable for a pregnancy test.

The pregnancy hormone is produced by the fertilized egg after it has attached to the endometrium. This procedure takes approx. 6 – 10 days, and then the hCG-level needs to get high enough to reach, or above the pregnancy tests sensitivity. In a normal pregnancy, hCG-levels will increase rapidly – often they will double every three days during the first trimester of pregnancy.

In case of discontinuing pregnancy (e.g. abortion of any kind), the pregnancy hormone level might still be increased for up to nine weeks. However, it could also decrease as fast as from one day to another.

How do you choose the “right” pregnancy test? There are so many different pregnancy tests on the market today, where price and quality can vary a lot, so it’s completely individual which one is a best for you.

Some important factors to consider before buying a pregnancy test.

In addition to the above, you should also think about how you prefer to perform your pregnancy test; holding it in the urine stream, or collection it in a cup/beaker first. Do you want to read the result yourself, or do you want to see it in a symbol form or words, and last but not least; the price – what are you willing to pay?

Below you can read a brief summary of a selection of different types of pregnancy tests:

Pregnancy test strip is usually a relatively cheap test and one of the most compact tests:

A pregnancy test midstream is larger and wider than the strip test (approx. like a pen)  and has a control band mark (C) and test band mark (T).

When to perform a pregnancy test

Many women/couples are so excited to know if they are pregnant or not, and can hardly wait to use a pregnancy test. But it might be a bad idea to test for pregnancy too early. In the very early pregnancy, not all pregnant women have had time enough to produce high enough hCG-levels for the test to pick it up.

Still, if you want to know the result as early as possible, you should probably consider an early pregnancy test, which are more sensitive and therefor have a higher chance to recognize elevated levels of the hCG hormone in the first days of pregnancy. Those tests can be used as early as 4 days before your first day of missed period and onward.

With a “normal” pregnancy test e.g. not considered as an early one, you can expect accurate result about 12-14 days after ovulation, so approximately just before your period is expected to start.

Always use the test straight after you’ve collected a urine sample. If a urine sample has been saved for too long before testing, it could affect the result and give misleading results.

Pregnancy tests can be purchased in many stores and pharmacies, but a very convenient and more anonymous way is buying your pregnancy test on the internet, like a Babyplan market space.

How to take a pregnancy test

Whichever pregnancy test you have chosen, a user manual must be attached to it. Before using the pregnancy test, you should carefully read the guide. Even though you’ve tried a similar test before, manuals can be different, and sometimes manufacturers are changing or editing manuals.

Different pregnancy tests may have different directions for use. For instance, strip tests should be used by dipping a test in a collected urine sample, but with a midstream test you can chose between holding it in the urine stream, or collecting a urine sample.

Pregnancy tests nowadays usually have a high-quality standard and are very safe. Many of the tests have an accuracy of over 99%. Home pregnancy tests are accurate as long as you follow the instructions correctly.

A positive test result is almost certainly correct. However, negative results are a little bit less reliable as they could be due to either the woman testing too early, or her not being pregnant at all.  Results read after the valid result reading time are to be fully ignored – the chemical reaction in the test could possibly continue for some time after, and cause lines to appear, or disappear.

How fast can a positive result show?

After taking a pregnancy test, how fast the result shows depends on how much pregnancy hormone there is present in the urine at the time, in relation to how sensitive the test is. But usually, results should appear within the first 5 minutes after testing.

Most pregnancy tests on the market today have a sensitivity of 20-25 mIU/ml of the pregnancy hormone, but there are also tests that require a higher level of pregnancy hormone before showing a positive outcome. (e.g., 50 mIU/ml).

Also, each pregnant woman produces an individual amount of pregnancy hormone. Because of this, some women can see a positive test result some days before expected period, while others a few days later.

A positive pregnancy test should always lead to contact with your doctor.

What could affect the result of a pregnancy test?

Certain factors may affect the result shown on your pregnancy test.

If a test is performed too early, it could show a negative result even though you in fact are pregnant.

If you have been drinking large amounts of fluid in the hours before performing the test, you may have diluted the urine, and thereby could get misleading negative results.

The result may also be false-positive if you are taking medication or any treatment which contains pregnancy hormone. Therefore, you should always read the instructions for any other medicines that you take before taking the test.

A false-positive result may occur if you have recently had a discontinued pregnancy (spontaneous abortion). Any bleeding can delay it and resemble a normal menstrual period (which may be slightly delayed), and even the woman may not be aware if it has happened.

Pregnancy hormone residues may still be in the urine for up to nine weeks after an interrupted pregnancy. How fast the level decreases is individual from woman to woman – sometimes it may be away from one day to another and in other cases last several weeks. Nine weeks after a spontaneous abortion / abortion you no longer expect that there are pregnancy hormone residues in the urine.

HCG: The Hormone that Helps You Through Pregnancy

Guide: How To Use Ovulation Tests